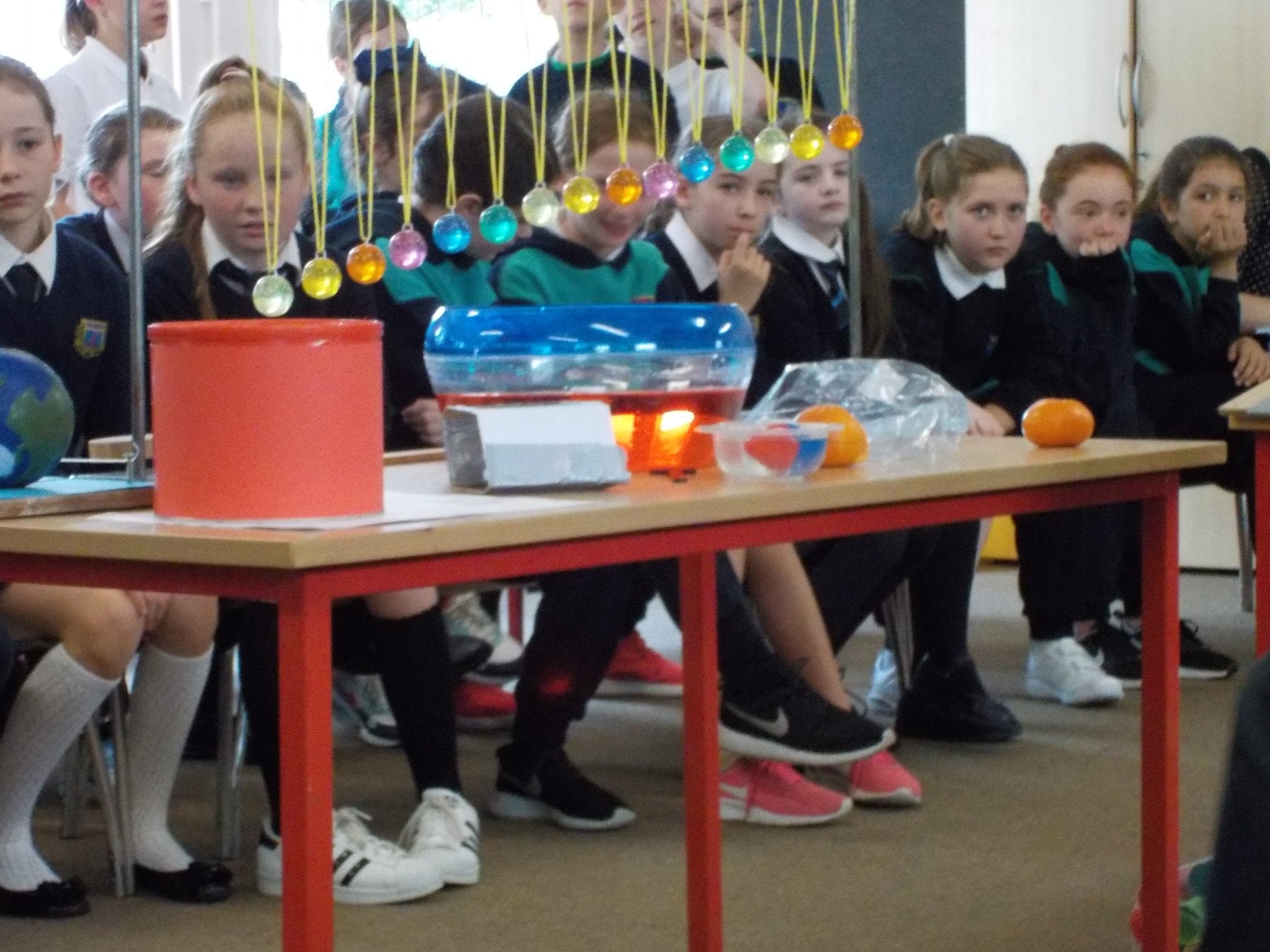 On the 12th and 13th September 2016, Science got off to a fantastic
start in St. Pius X G.N.S. as Declan Holmes (Science Ireland) visited
with his new and exciting Science Fair.
The idea of the Fair was that Declan would teach a variety of
Scientific concepts to the 5th and 6th classes, and they in turn would
teach their younger counterparts! Not only did the older students
get the opportunity to become Science teachers, but they also got
the chance to participate in a fun, interactive Science Show which
Declan did with each class group in the school.
Ten Science stations were set up, each with a specific Scientific
concept. Through questioning and investigation, Declan helped the
students understand the Science behind each one. There was a
forward rolling cylinder on a ramp, lights and lenses showing us the
workings of the human eye, a balancing metre stick and bird that
could balance on a fingertip, a tin with a wound up elastic band inside
which, as soon as it was rolled forward, would roll backwards.
The pendulum was a definite favourite.  Declan explained how a
pendulum was once used to tell the time. He demonstrated how the
longer the string was on the pendulum, the slower it moved.  Declan
had made a spectacular display of a variety of pendulums, each one a
different length and each ball a different colour. He aligned them
on a piece of cardboard together and set them in motion. This
created a stunning spectacle as each one moved at a different
speed. Declan had to repeat this one several times as the girls loved
it so much!
Many of the girls loved the Air Bazooka as they tried to knock a
display of plastic cups from a distance. They discovered that if
they pulled the elastic band hard enough, they could even move the
window blinds! Electric magnetic fields were clearly visible as Declan
placed mini magnets in dyed water. One station which had a tall
container of water and three cans showed a surprising revelation
that Coke and diet Coke float on water, but Pepsi sinks! After many
theories and guesses, the girls realised that it was because Pepsi has
more sugar, which of course is more dense.
After providing the girls with the correct notes, the girls were able
to play “Twinkle Twinkle” on the Boomwhackers. Static Electricity
was demonstrated using a piece of material and straws.
During the two days, Declan visited each class and did a fantastic
show geared to each class level. He swung a glass FULL of water
around in a circle without spilling a drop! He made water dance using
the vibration from a tuning fork. In pairs, some of the girls enjoyed
a game with a Fun Fly Stick and a tinsel ball! The Fun Fly Stick is a
battery operated static electricity generator that allows you to
float tinsel shapes on a cloud of electrons. Declan used a variety of
balloons of different shapes to demonstrate how Science can be
investigated in a fun interactive way! After the show, many
questioned whether Declan is a Scientist OR a Magician!
Thanks Declan for a fantastic few days and inspiring the Mini
Scientists of St. Pius X girl