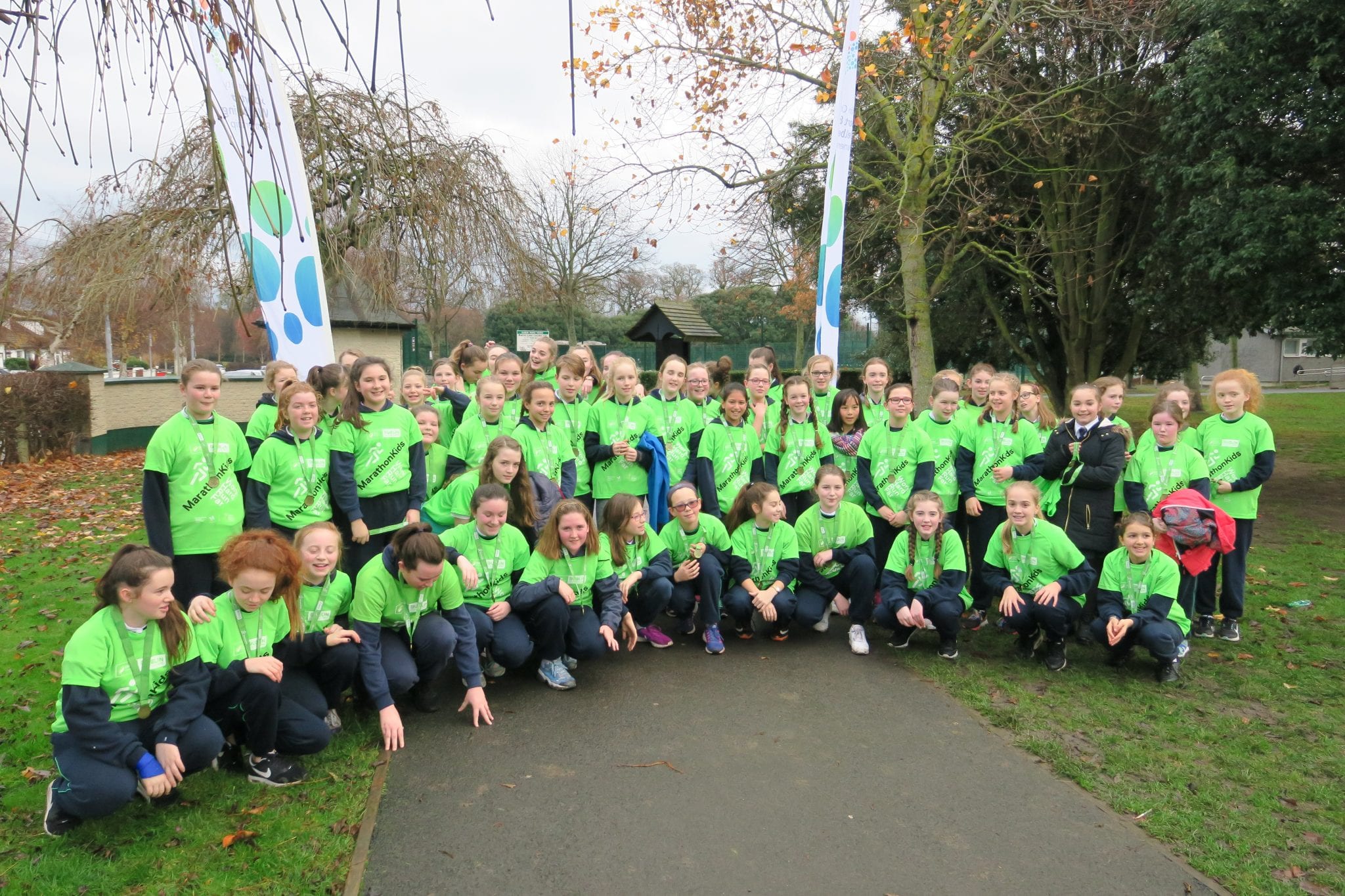 This year we did a marathon (a full one!) with Marathon Kids. Michelle was our instructor. We started on the 19th of September. We ran 600m at the start and then went up to a whopping 1800m. In the space of just eight weeks we ran over a whole marathon!

Me (Cassie) and Niamh did the final lap twice but very few from our school came, so we did another ‘Last Mile’. We did the other ‘Last Mile’, with St Louis. Niamh and Alex came first.  Everyone had a great time and got a medal and a green t-shirt

On the 16th of September a woman called Michelle came in to tell us that we were going to complete a Marathon. We were all very excited. We started on the 19th September by running one lap around the school. This was increased by 200m (1/2 lap) every week. In the end, after eight weeks, we were running 1,600 meters. It was great fun. After eight weeks I went to the National Aquatics Centre to complete our final mile. We also completed a run in Bushy Park. We got a medal and a t-shirt and we were all very happy.

On Friday 16th of September Michelle came into our class to talk to us about Marathon Kids, a running programme that was eight weeks long. She explained us all how important running is and to try and run the laps of the school.  She told us that it wasn’t about being the fastest runner, it was about taking your time and doing it in a speed that is right for you. We began by running one lap of the school on Monday 19th September. For that week we ran one lap of the school every day. Each week we added on half a lap of the school.

Some people were faster than others but everyone still ran the lap. When we got to three laps people started to walk the laps but others still ran. After eight week we were at four laps. It took us a long time to do, but we still all completed it. Some of us walked, some of us ran.

Then on Monday the 12th of December we went to Bushy Park .We split into three groups and we chose which group we wanted to go in. When we finished running/ walking a lap of the park we received a gold medal and got to keep our green t-shirt. Our fitness levels had improved and we all enjoyed running. I would recommend a class doing it.

On Friday 16th of September a woman called Michelle came in to talk to us about her programme. We started to run on Monday the 19th of September. We weren’t used to it. We were so tired and I was in need of water. After a few weeks we got used to running and enjoyed it very much. We did it every day. When the time came to do the mile in Bushy Park we were very excited. We ran with St. Louis School and at the end we received a top and a medal.  I would definitely recommend it to kids everywhere! (10 out of 10)

Over the eight weeks we completed 25.2 miles around the school. Then after that our school and St Louis Rathmines gathered in Bushy Park to run a mile together. After doing all this we were given a medal and a t shirt.

Personally I didn’t like it at the start, as I don’t like running. But, gradually over the weeks, I began to gain an interest in it! I am not very good at running. It’s wasn’t my favourite sport but it was quite an enjoyable experience.

Our Class and Ms Doherty’s did a running program organised by Dublin City Sport and Wellbeing Partnership. Michelle came into us on Friday 16th of December and told us all about the program. We started off with 600m, followed by 800m, then 1000 m, then 1,200 m, followed by 1,400 m, then 1,600 m and then finally 1,800m. We could feel the progress over the eight weeks and I really enjoyed it. It was great stress relief. I enjoyed getting fresh air and exercise and it was fun.