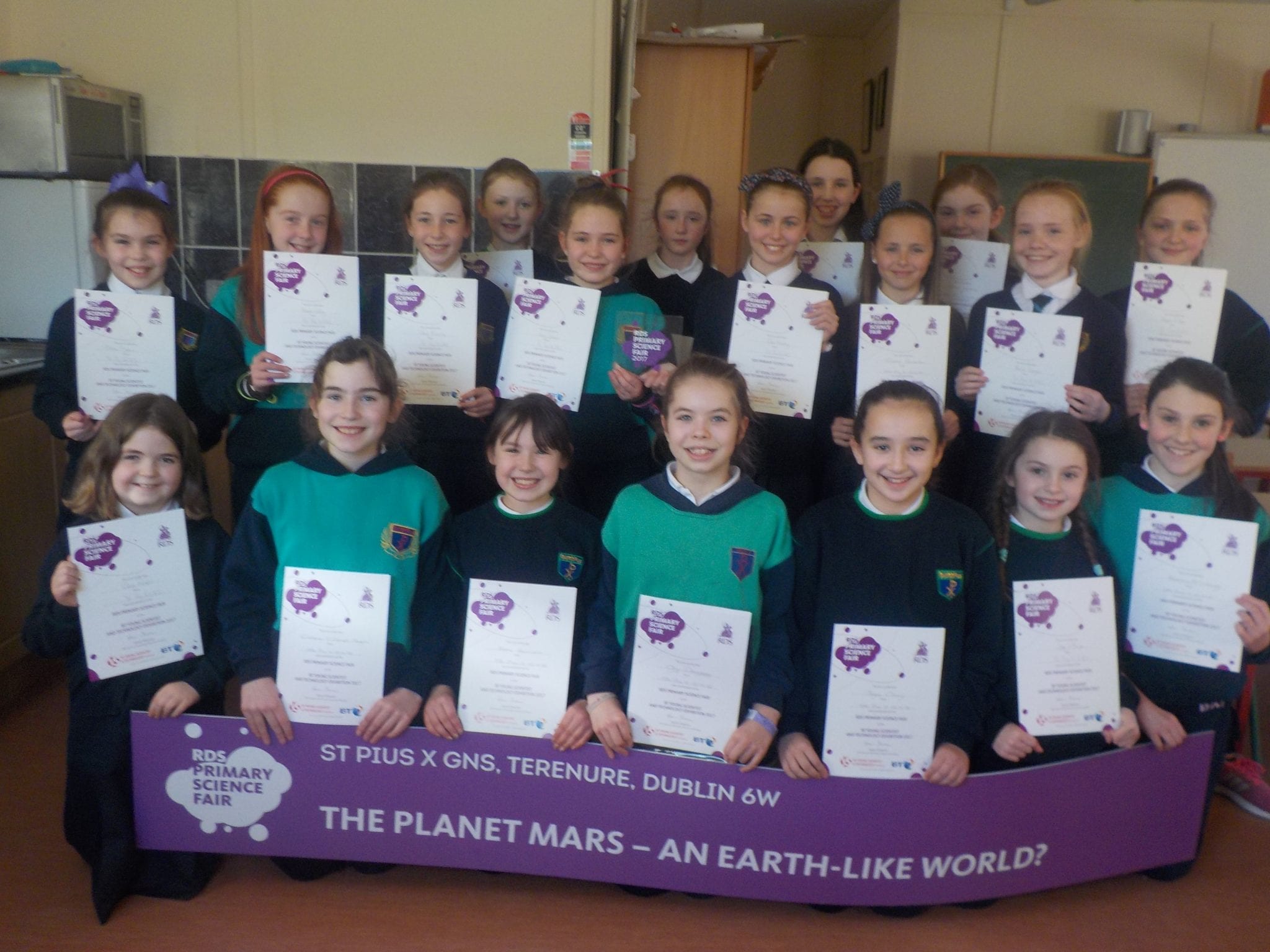 There was a buzz of excitement when we arrived at the RDS on Thursday 12th January.  We set up all the elements of our project  “The planet Mars – an Earth-like World?” at our allotted stand.   Martin, our 3D Martian was placed in a very prominent place to attract the attention of the passersby…. and it worked!  Within an hour, the RTE camera crew with Will Goodbody showed great interest and soon Will was interviewing Alison.  To all our delight, Alison was on the RTE 1 O`Clock news.  We watch News2day daily on the interactive boards in St. Pius X girls and we were so excited when Tommy from News2day arrived at the stand and interviewed Libby!  This interview was shown on News2day that day.

We had investigated the similarities and differences between Mars and Earth. After carrying out  research and doing experiments, we learnt about  Martian canals, if and how a Martian could  survive on Mars, why Mars is red,  greenhouses on Mars in 2030,  gases on Mars,  resources on Mars, Mount Olympus AND as mentioned earlier we created a 3D Martian that we named Martin .

We gave Martin special features –  long eyelashes to protect his eyes from the red dust, a darker coloured head to absorb the heat, veins carrying water  running from his head to all the parts of his body, a long strong neck to bury his head in the ground during storms, a hollow body to carry oxygen, gills on the side of the head for breathing, large nostrils as there`s so little oxygen on Mars , tentacles to help him move quickly and suction pads on these, as there is so little gravity on Mars. We came to the conclusion that Martin would definitely survive on Mars!

When the judges arrived at our stand, we explained all about our project and answered all the questions confidently…even the really difficult ones!  They were really impressed and awarded us a plaque and fantastic written feedback.

“One of my favourite parts of the Primary Science Fair was the Samsung virtual reality stand. I sat into a spinning chair and put on a mask and earphones. It started off with a man juggling fire. The fire was so close to me, I felt like I was in it! Then I was surfing and huge waves were coming at me! Lastly I was on a rollercoaster, which had a really big drop. When I looked around I could see lots of people beneath me. It was so lifelike and scary! I really enjoyed it!!!”

“I thought the PSF was great, especially when I was interviewed by Tommy from News2day!”

“The PSF was amazing, fun and exciting, especially when we were interviewed by Will Goodbody and Tommy from RTE AND we met Nicky Byrne!”

“My favourite part of the PSF was when the judge came and asked me lots of questions on our project!”

“An enjoyable and unforgettable experience!”

“An experience of a lifetime!”

“ My favourite part was when we could walk around,  make slime and get freebies AND of course present our project!”

“Everyone enjoyed going to the RDS.  It was huge!  There were so many projects and lots of people and I`m sure I can say on everybody`s behalf, it was an amazing experience!”

“I thought it was an amazing opportunity that I enjoyed doing with my friends and I hope to do more in the future!”

“My favourite bit of the PSF was just being there, but also seeing other projects and being asked questions by the judges.”

“For me, the best bit was knowing that it will open doors to a life of Science and it will do so for others too.”

“I thought it was one of the best opportunities I`ve had in primary school! I really enjoyed it.”