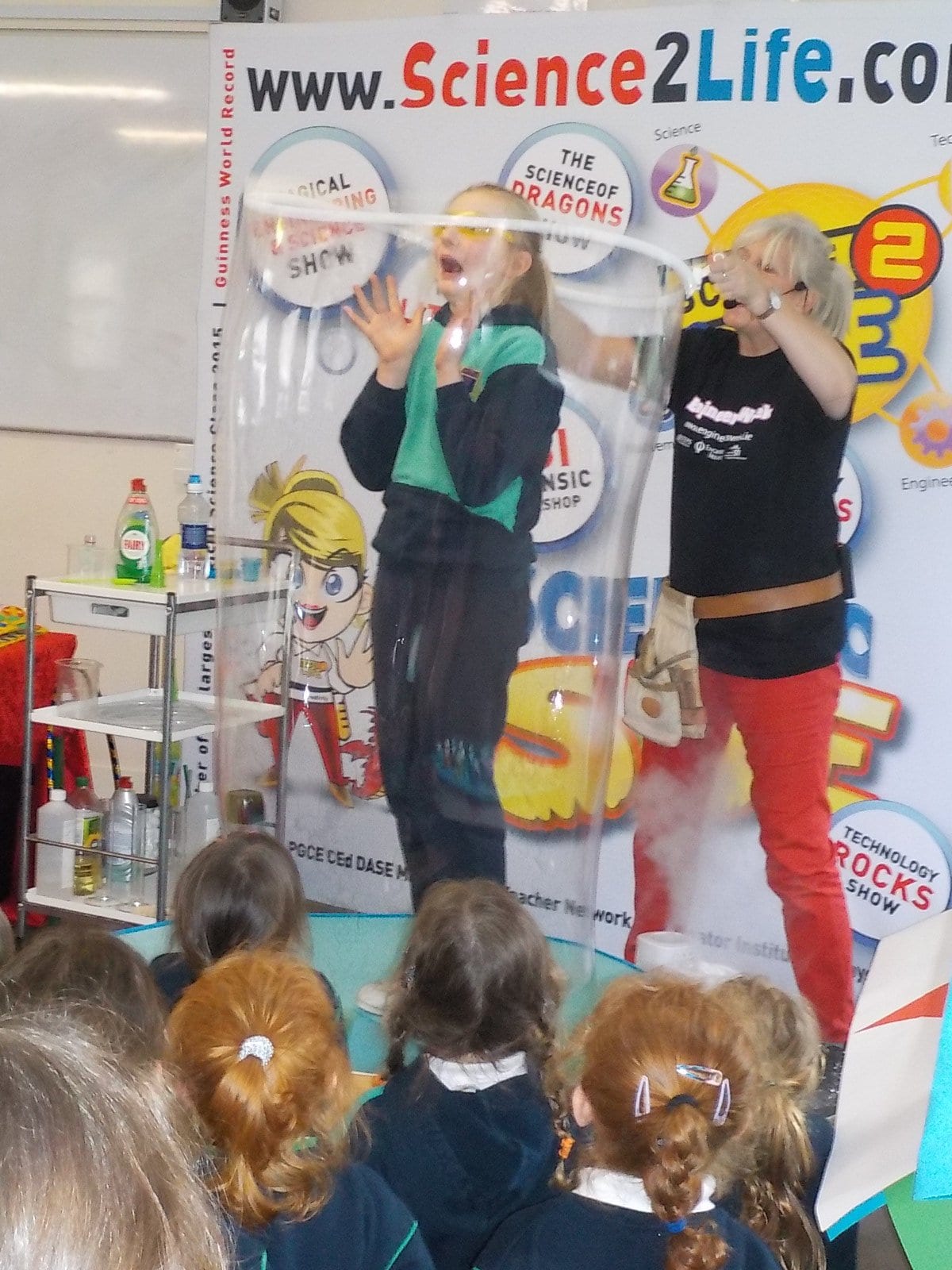 From a master class in the manufacture of slime, to the construction of an authentic Norman castle, the projects were many and varied! With the help of two engineers Eamonn and Katie, the girls had lots of help and advice to help them on their way!

The week kicked off with a fun, interactive show, “The Science of Bubbles” with Scientific Sue. Junior Infants up to 6th classes AND the teachers were gripped as Sue introduced us to the Magical World of Bubbleology. She entertained us with lots of incredible bubble tricks and related them to Science.  Sue showed us how to make bubble monsters out of socks!  Ellen was shocked and amazed as she was encased inside a GIGANTIC bubble!

The two 6th classes participated in an engineering Rediscovery Workshop in Ballyroan library.  The workshop was given by two female engineers from the “Rediscovery Centre”.  They gave a captivating talk on engineering and how it is used everywhere in everyday life, whether you`re a technician, a plumber or even a chef!  The girls were shown a PowerPoint Presentation on landfills and how to prevent global environmental harm.  The presenters emphasised the importance of recycling and the girls were amazed to see a guitar made out of a wardrobe door, a coat made out of an Ikea bag, a chandelier made out of 3D glasses and lots more!  The girls were then given three engineering challenges to carry out. Firstly, they had the task of constructing a four-sided, earthquake-proof house out of toothpicks and marshmallows.  Once completed, it was tested to see if it could withstand being put in a jelly tray and shaken from side to side for 10 seconds!  Most teams successfully completed the challenge.    The next task was to construct a 50cm high K`nex building which would hold a toy elephant and rhino that had a combined weight of 500g.  Keeping it sturdy, the girls found was the main problem. The bubble challenge was to discover which mix produced the biggest bubbles!  One group found that 30 drops of glycerin could produce a whopping 35cm diameter bubble. For many of the 6th class girls engineering as a future career is a definite possibility!

Thanks to engineer Eamonn McDonagh who visited the girls on numerous occasions to share his expertise and knowledge in the run up to Engineers Week.  Thanks also to Katie Grehan, an engineer who works with Festo, who also gave up her time to chat with the budding engineers! Festo is a German industrial control and automation company.  It has technologically reproduced the unique way certain animals and birds move.  Katie showed us clips of the robots in action.  We particularly liked the Bionic Kangaroo, which could recover the energy when jumping, store it and efficiently use it for the next jump!

The culmination of the week was the presentation of the completed engineering projects which were displayed for students and teachers to view.  STEPS Engineers Ireland has made a primary schools engineering resource pack available to primary schools in Ireland.  It was a fantastic help in showing the students the steps engineers go through in carrying out the design process.  The completed projects included marble runs, edible paint, gumball machines, a Disney castle with portable moat, an egg drop, a robot that moves only in the dark, a variety of 3D structures made from toothpicks and marshmallows, timed paper construction challenges, an ingenious idea to solve the missing sock dilemma and lots, lots more!

Every child in the school received a well-deserved certificate for their participation in Engineers Week 2017!