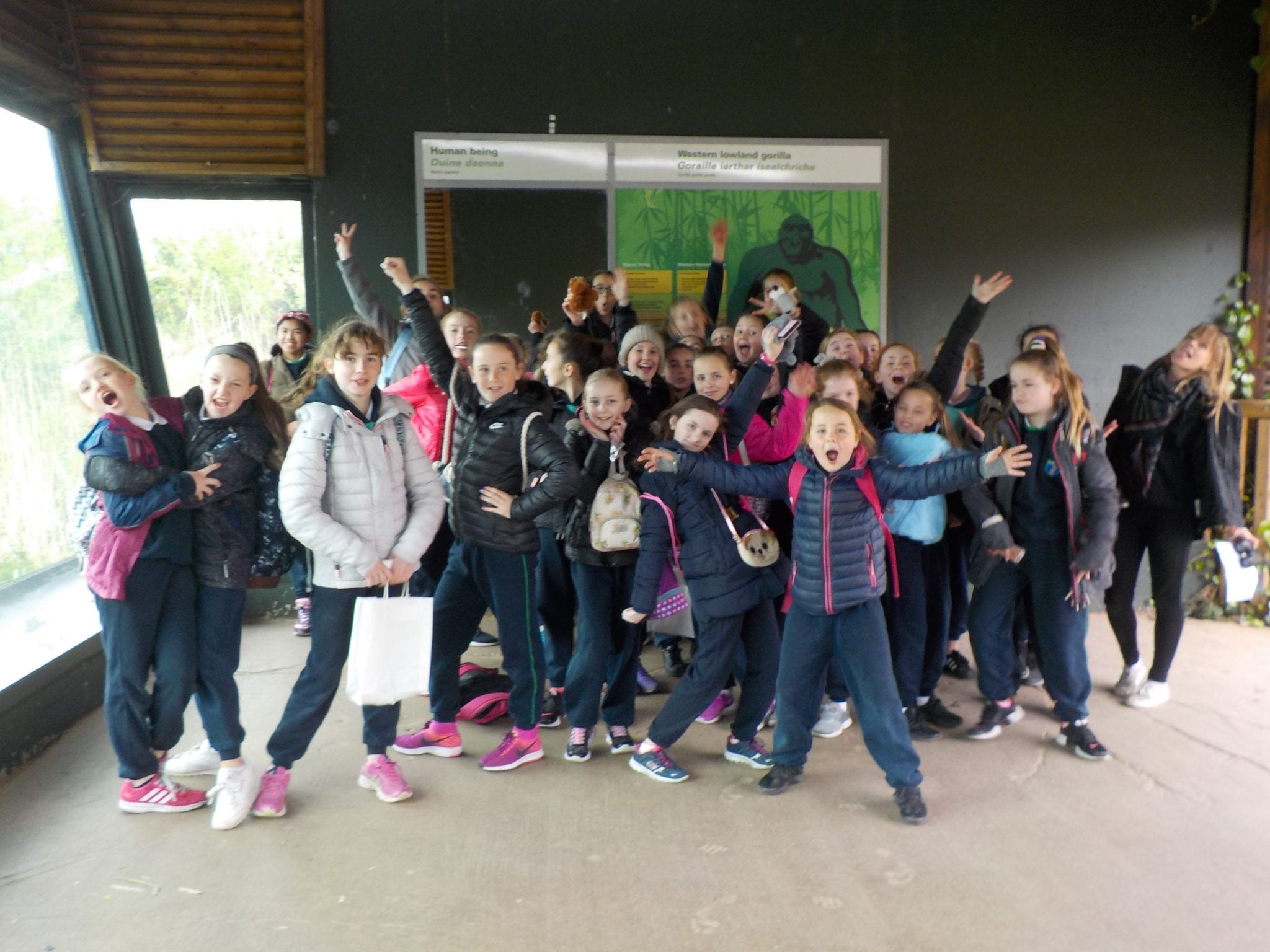 There was great excitement on Thursday 27th April as the two 5th classes headed off on their tour to Dublin Zoo. Having researched many of the animals residing in the zoo, the girls were looking forward to seeing the animals for real! There were two planned guided tours, one the African Adventure and the other the Rainforest Ranger.

The meerkat restaurant was our first stop.  We observed the mob of meerkats from behind their glass enclosure.  Most of them looked like statues, but two were having a fight and were showing their very sharp teeth!  Watching News2day over the last few days, we had learnt that the new calf on the family farm had been named Noinín, so we were delighted to see her.  Becky the pig came up to welcome us.  We know that sloths spend most of their lives upside down and that`s exactly how we found the two-toed sloths in Dublin zoo! The red pandas are so pretty and were happily snoozing in trees as we passed by.   The tapir looked very relaxed lying in his straw bed.  We loved watching the sea lions perform acrobatics under the water.

Marina was our guide.  She brought us to the African Savanna where the giraffes were browsing and the zebras were wandering amongst them. We learnt that a group of zebras is called a Dazzle  and once zebras are in a Dazzle, their predators find it very difficult to attack.  Marina told us that one of the Rothschild giraffes, Maeve had lost some of her tail, as it had been nibbled away by one of the zebras, who was constantly annoying her. The situation has been resolved and the giraffe, oryx , ostrich and zebra are all now living happily together. From there we went to the rhino enclosure.  Marina told us rhino skin is very smooth, but very thick.   When rhinos charge they are extremely fast. Their horns are made of keratin, the same material our skin and hair is made up of. Marina told us that there are only three northern white rhinos left worldwide, one male and two females and because of this, they are under guard 24/7.  Along the Kaziranga forest trail, we saw the group of Asian elephants. A beautiful female calf was born in March to Bernhardine, the matriarch.  The okapi looks very like a zebra but is more closely related to the giraffe.  Okapis are  brilliant at camouflage and are generally very shy creatures.  Marina was very surprised, and we were delighted that the okapi  came right up beside us. The African painted dogs all have unique coat markings and live in packs of up to twenty adults.  We were told that the whole pack takes care of the pups and allows them to feed first.   There were so many more animals to see, but so little time….

We had an amazing, fun day and learnt so many new and interesting facts.

We took lots of photos which you can enjoy here!