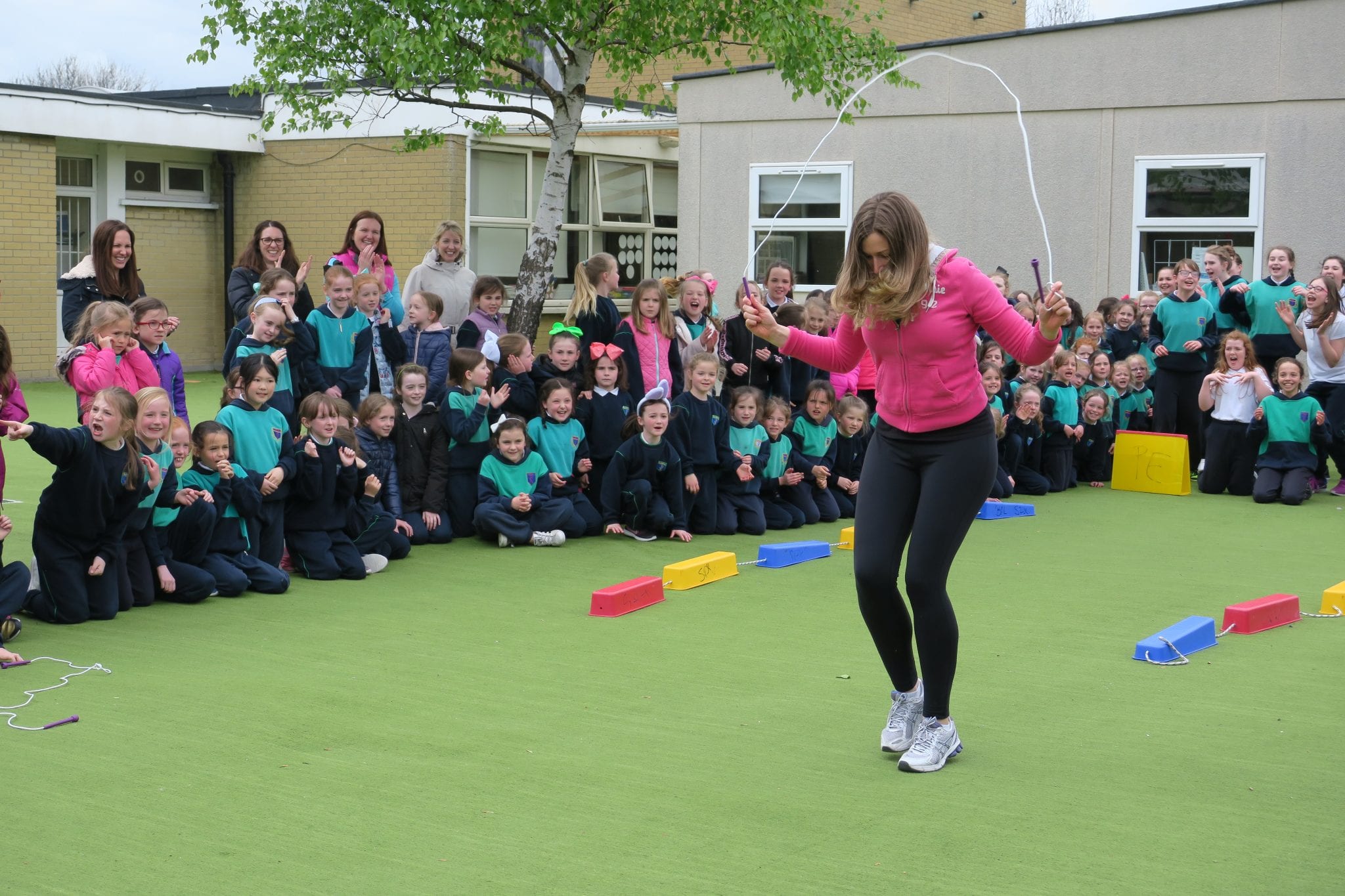 The last week in April, was our school’s Active Week. It was a very busy week for 6th class, between organising different activities and taking part in them.

On Monday the 24th we did dancing with Ms. O’Reilly to a song from “Hairspray”. It was a great laugh for everyone. After little break, we did different activities. I was skipping with Ms Godson’s class. The next day, we did a 5km walk past Templeogue College, up to the Spawell and back to the school. It was good exercise and it was great to get out of a stuffy classroom and into the fresh air.

On Wednesday we had a very busy schedule. Early in the morning I had to do “Wake up, Shake up” with a couple of others. After break we had cricket with Vanessa, then yoga and in the afternoon we had Ultimate Frisbee! It was a very busy day.

Thursday was a more relaxed day but not by much. We still did skipping with two classes and after big break we did a teacher against 6th class obstacle race. I didn’t know the teachers could run that fast. It was very close but 6th class won by a couple of seconds. It was very enjoyable.

On Friday we are going to play dodge ball. I can’t wait. It was a great week!!

After coming back from a long Easter break we had Active Week. On Monday morning we all ran into the middle yard to take part in “Wake Up, Shake Up”. We did this every day from Monday to Friday and we had a blast!

On Tuesday as soon as we went into school, we went on a 5km walk. We walked passed Faughs all the way to the Spawell and back to the school again. We were all so tired when we came back.

On Wednesday we played cricket. It was really fun. This was their second time coming into our school and I hope they come again!!

On Thursday we did an obstacle course, teachers Vs 6th class and we won!! We all cheered as the girls were competing.

On Friday (today) we are so wrecked. We enjoyed our week of fun but now sadly it’s back to work.

Active Week started on Monday the 24th of April when we were just back from our, two week, Easter holidays. We did dancing with Ms O’ Reilly and we danced to “Hairspray”.

After little break we were all assigned jobs to help out with younger classes in the school. I was in charge of skipping. Skipping was really fun because I could teach the little kids how to skip.

On Tuesday morning at 8.30 we did “Wake up, Shake up”. It’s where you dance to songs. But people show you what to do. Then we went to get ready for the 5 km walk at 8.50. The walk was really fun but a bit tiring. Chatting took my mind off all the walking. We then had skipping again which was really fun because we could get out of work.

On Wednesday had “Wake up, Shake up” first. We had it for the whole five days of the week and it was the best. After that we had Maths, followed by cricket which was really fun but by accident we hit two balls onto the roof. Ten minutes after that we had yoga. We learnt a new pose. We then played Ultimate Frisbee it was so much fun. People kept getting hit on the head.

Finally on Thursday we had games with the infants. At the end of the day we had an obstacle course where 6th class were up against the teachers. Of course the 6th class won! It was hilarious because they kept tripping up. This week has been the best week ever.

On Monday the 24th of April we started Active Week with an amazing start “Wake Up, Shake Up” .Ciara D, Caitlin, Heidi, Lucy, Beatrice and I all did the dancing and everyone else copied us. A short while later we had dancing with Ms O’Reilly. We learned a dance to “The Nicest Kids in Town” from Hairspray. We danced so hard that at the end of it we needed a break.

After break we did parachutes with Junior Infants. First we did a game where we made a tent and then we passed a ball around. When the classes had gone, our class played with the parachute, which was so fun. We made tunnels which we had to try to squeeze through and we had a mini party inside.

On Tuesday morning after Wake Up, Shake up we went on a 5km walk and we talked about all the fun stuff that we’d been doing during Active week.

Wednesday has been my favourite day so far. We started the day by doing Cricket with Vanessa and Jenny, followed by yoga with Cathy. She made us feel very relaxed and we learned lots of new poses. To finish the day we did Ultimate Frisbee with Bryan. Bryan taught us how to throw and catch the frisbee. We then played “Frisbee dodge ball”. If you get hit with a Frisbee you’re out.

On Thursday afternoon we did the annual teachers Vs sixth class obstacle course. The sixth class won. They were a sporty bunch. To finish the week we played dodge ball in the front yard with two different teams. I’m not sure which team won but they both did a great job. Active week was an amazing week. This week has been my favourite one by a mile! We will all miss Active Week next year as we had so much fun!!