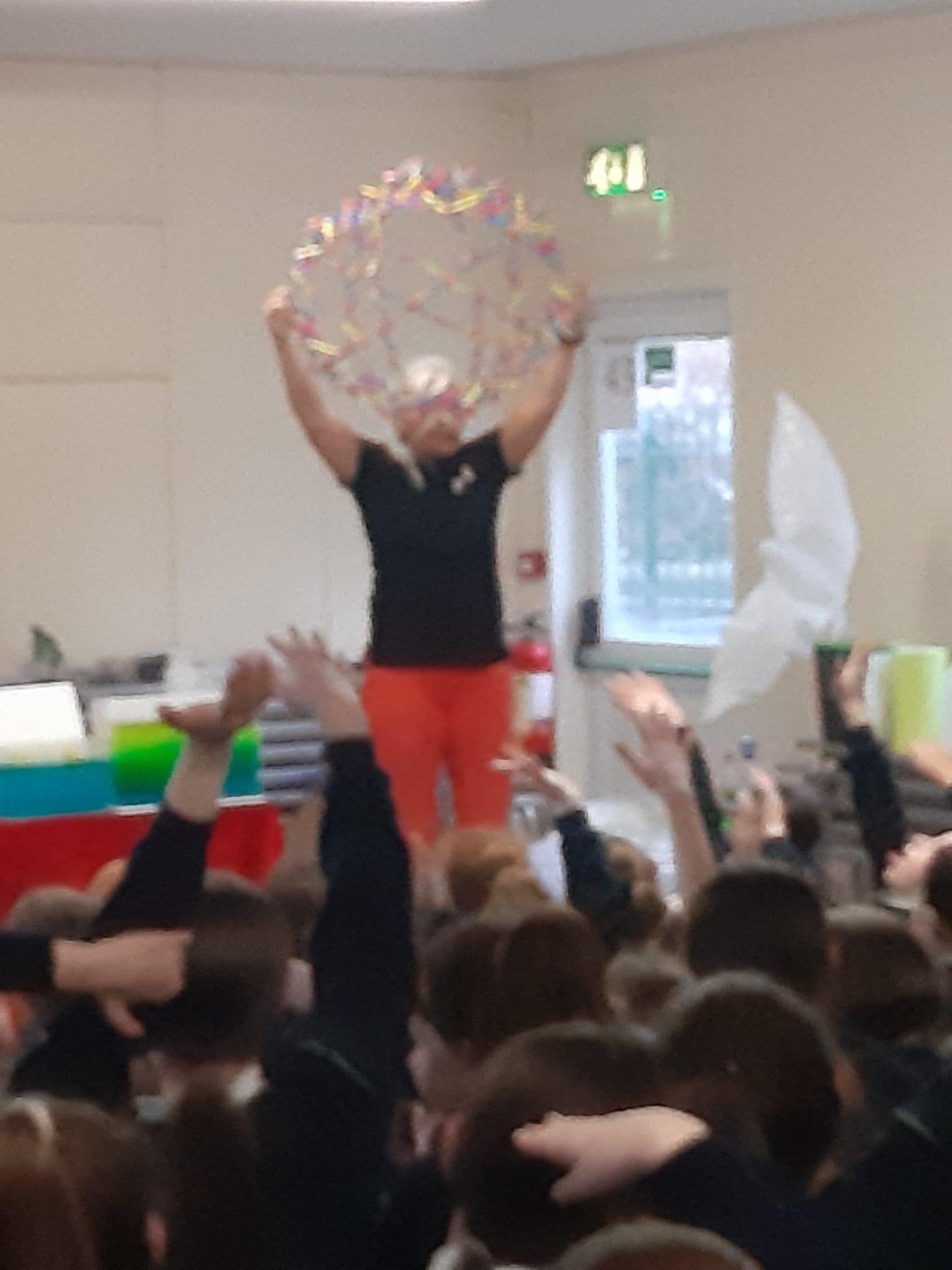 When we got into the G.P. room we all sat down.   Scientific Sue welcomed us and introduced herself.

Next Sue told us that small animals especially hedgehogs, climb into plastic bottles to get warm and often can`t get out!

Sue then did an experiment with two very excited volunteers.   She handed the two girls a container each with water that was dyed blue. They put styrofoam  that was bio-degradable into one and one that was not bio-degradable into the other.   The girls were told to shake up their containers with lids on them to see what would happen. They shook them for about seven seconds.   We saw that the bio-degradable one had dissolved in the water and the other had stayed the same… afloat. Sue told us that if a mother bird came along and ate it, she would give it to her chicks and they would die!

Next Sue showed us fake poo!   She had made it out of scientific materials so she could demonstrate that as soon as you pick up poo you have germs all over your hands. She told us how many  germs were in dog poo and that there are more germs in it than in a human, a cow and a horse together. Sue told us that dogs can sense a magnetic field that humans can`t, and that`s why many of them will circle around and stop in the same place each time when they need to have a poo!

After that Sue showed us a hearing device where you wear special headphones that plug into a machine.  You then hold back a button. It helps you to hear things really loudly,  especially things that would be a little hard to hear normally. She blindfolded Emma from our class and gave her the device. Sue rattled a plastic bag and kept on moving around to see if Emma could find her using the device and  she did!

Next Sue asked us to rub our hands together as fast as we could.  When we did so our hands started to hurt and go red. That is because of friction.

After that Sue got a hairdryer, turned it on and pointed it at a deflated balloon. It inflated and started to fly like a bird.  This is because warm air rises.   When she took it away, “the bird” came back down and started to float around the room.

Shortly after, using a whale puppet, Sue demonstrated how three of them had ended up dead on a beach  because of the amount of plastic they had eaten.   This is because of the carelessness of humans with their plastic waste.

Soon after that she told us that when wee is mixed in with the sodium polyacrylate  in a nappy, it turns into crystals.  When people discard nappies in a selfish way,  animals come along, eat them and could then possibly die.

Lastly Sue blew a hairdryer at a canvas, the black paint disappeared and you could see the writing that said………

THE ONLY CURE FOR LITTER IS YOU!

Thanks Scientific Sue for informing us about the problems that litter, especially

plastic, can cause in our environment and showing us how we can help.